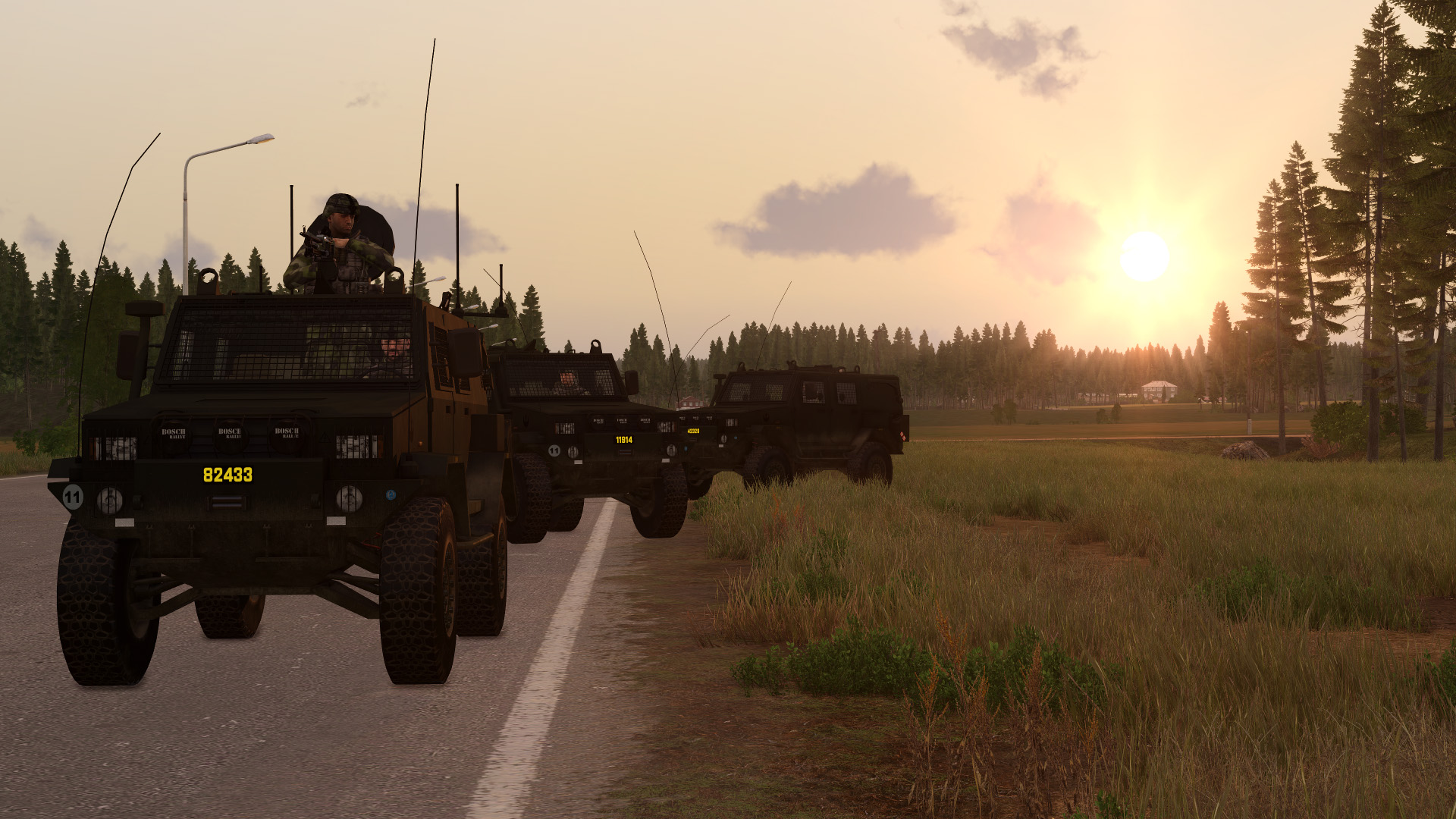 Horizon Islands Republic, Province of Tanoa Background In the early 1970's the French Colonial Administration launched a development program focusing on the establishment of agricultural and fishery cooperatives for artisanal fishermen. It also received significant foreign investment funds for various fishery development projects, as the Tanoan fishing industry was considered to have a lot of potential owing to its unexploited marine stocks. Post-independence from the French Republic, the island nation saw an influx of foreign investors and fishery companies that would, over time, outcompete the native fisheries. During the 1990's the unemployment rates amongst native Tanoans saw a dramatic increase brought on by a region-wide economic crisis that plunged the island nation into a recession. However, most foreign companies and investors remained relatively unaffected by this economic downturn. The rampant unemployment, combined with the strong foreign competition on the job market, would inevitably lead to many Tanoans taking up piracy as an alternative income source. In 1997, The Horizon Islands government declared a "war on piracy" and started conducting anti-piratcy countermeasures in the Tanoan province after a particularly gruesome scene occured aboard the French oil tanker San Martin where seven men were killed, and the tanker was set ablaze. The effects of the anti-piracy measures have so far been futile, and both native and foreign ships are being harassed by Tanoan pirates on an almost daily basis. Investigations done by the Horizon Islands Intelligence Bureau have shown that some criminal networks are closely linked in with the pirates, and it is believed that most seized goods are sold on the underground black market. On the 2nd of June, 2003, the American cargo ship ISS Juventus was raided off the Tanoan coast by pirates. The crew of the ship, except for one sailor whom escaped, were taken hostage and have been hauled off the ship to an unknown location somewhere in the province of Tanoa. The ship was left adrift after the crew had been evacuated, and several hundred thousand of dollars of goods were stolen from the ship. Surveillance footage recovered from the ship on the 4th of June, 2003, showed that the pirate group was of a small size, approximately 8 members, and were carrying no distinguishing marks on their persons. However, the escaped sailor mentioned that one of the men were not a native Tanoan, and spoke with what he presumed to be a Slavic accent. The strike on the US-based cargo vessel, alongside the Tanoan government's inaction, caused the American embassy to call for aid in order to localize and rescue the crew of ISS Juventus. A Navy Task Force (Task Force 87 Zulu) was put together, and have been sent out to the Tanoan islands with the goal of rescuing the crewmen, and aid the Tanoan government in significantly decreasing piracy in the area. Situation 13th of June, 2003, 23:30. Radio signal operators aboard the USS Nimitz have been monitoring the radio traffic on the islands, and have isolated a small group of islands to be a location of a pirate hideout and stash. We do not know if the pirates on the island are from the same group as the ones that boarded the ISS Juventus, however the speculated inter-connectivity of the pirate groups with the criminal underground might give us some clues as to who's behind the Juventus raid. A Navy Seals Special Operations force has been dispatched to the southern coast of the Tanoan mainland. 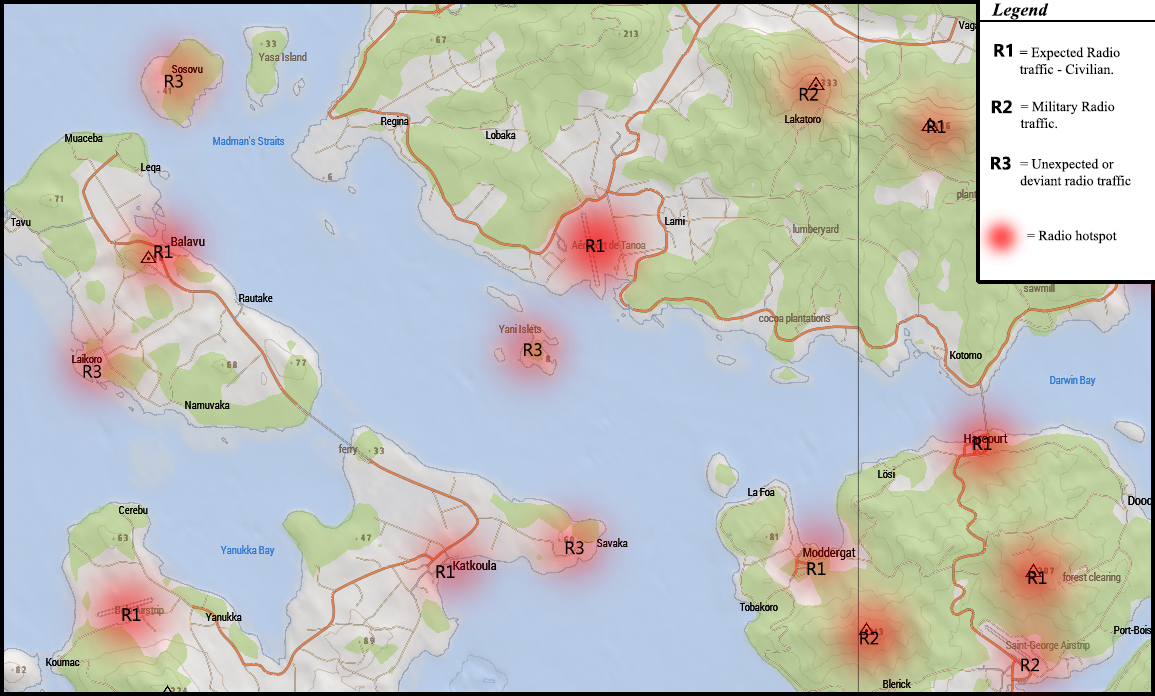 Map of radio hotspots, Tanoa, 12th of June, 2003 Enemy Forces Our enemy are the Tanoan pirates. The enemy utilizes a mix between Soviet and Western equipment (AK-47s, FAL, M16, etc.) presumably sourced from the black market, however lack most forms of personal protective equipment. The enemy utilizes civilian clothing, and are able to hide amongst the civilian populace. Most vehicles observed to be used by the enemy are smaller civilian boats and fishing vessels, however ordinary civilian land vehicles might also be utilized by the enemy where applicable. This might give the enemy a large freedom of movement across our operation area. Their numbers and composition are unknown. We speculate that the enemy operates in smaller groups of squad-sized elements. Friendly forces While there are no friendly forces that will affect our operations, there are several US units stationed around the Tanoan mainland and at sea. Most notably the headquarters of Task Force 87 Zulu aircraft carrier USS Nimitz, alongside a fleet of destroyers. There is 1x Rotary Wing (UH-6OM - CALLSIGN ICEPACK 1-1) stationed on the USS Nimitz on stand-by, ready to act as a medical and transport element for the crew of ISS Juventus. The Rotary Wing can be deployed to aid our operations. Mission Our platoon's mission is to conduct a raid on the island group of YANI ISLETS, and search through the speculated pirate holdout for intelligence that might point us to the whereabouts of the ISS Juventus crew. We will extract from the islets and await further orders once our mission is complete. Execution Tasks Alpha 1-1 At commander's discretion... Alpha 1-2 At commander's discretion... Alpha 1-3 At commander's discretion... Alpha 1-4 At commander's discretion... Coordinating instructions We shall utilize the cover of the dark and our Nightvision capabilities in order to remain undetected by the enemy for as long as possible, until all units are in position. Administration and Logstics Administration Medical plan: Primarily, most medical situations should be resolved within the squad, or platoon. In the case of MASSCAS or the need for advanced medical care, ICEPACK 1-1 can be called in as MEDEVAC. Prisoner handling procedure: If any prisoners are taken, they are to be extracted from the position where they are found to a safe location as specified by higher command, where they shall be picked up by friendly forces and transferred to the Tanoan government. Logistics Ammunition and resupply will initially be performed at a squad-level. ICEPACK 1-1 can be called for supply drops via crates where applicable. Our platoon has 4x assault boats (Dinghy) at our disposal. They're suitable for rapid deployment and across small straits, however their speed is limited. Command and Signal Platoon Net: LR 50. Air Net: LR 60. Alpha 1: 100 Alpha 1-1: 110 Alpha 1-2: 120 Alpha 1-3: 130 Alpha 1-4: 140 Speltekniskt Initial "respawn" är avslagen - spelarna startar på en avsatt startpunkt. Respawn därefter sker ombord USS Nimitz, där spelare kan flygas in med ICEPACK 1-1 till operationsområdet. Andrepiloten har DOCTOR-medical level, och kan sätta PAK i HKP. Intel-objekt kommer finnas i spelvärlden, vilket innebär att ni ska leta någorlunda noga efter att ha pangat fienden till döds. Ytterligare frågor riktas till scenarioskapare via Discord.